After the killing of two eagles in Southern England including one in Dorset, Chris Loder suggested that police would be wasting resources by investigating.

In a tweet sent out on Thursday 10th February he seems to acknowledge that a crime has been committed by saying "I don't condone this". He then suggests police spend their time doing somethng else. 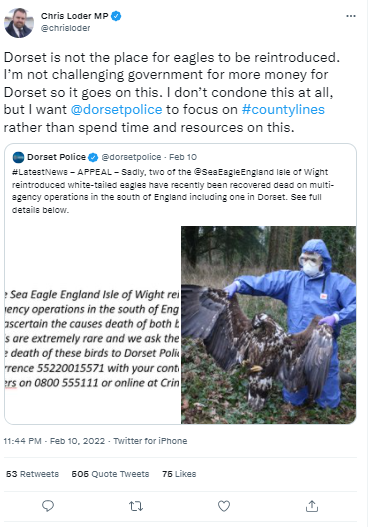 Kelvin Clayton from Dorset Green Party said "Frankly I am concerned that an MP uses his position to try to intervene to stop the investigation of a potential wildlife crime. If there has been a crime then let the police do their work without interference." 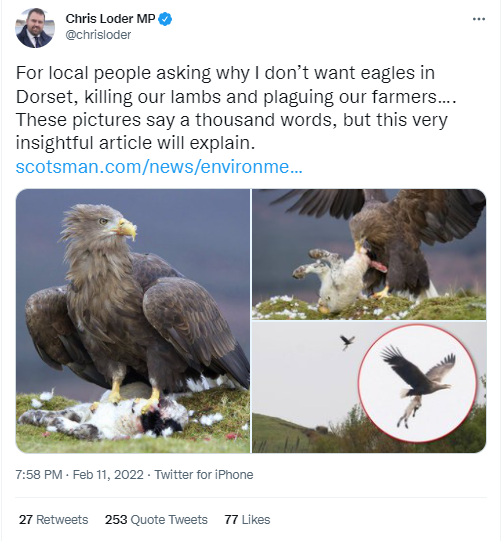 However it was later revealed (by the photographer Peter Cairns) that two of the photos in Loder's tweet were staged using a captive eagle and a dead lamb.

Kelvin Clayton said "Presumably he thinks this will play well with constituents in rural Dorset but for starters he has revealed his ignorance on what white-tailed eagles live on! It is a scavenger bird feeding mainly on carrion but will also catch fish and seagulls. It's also a bit of a nonsense to suggest we don't want eagles in Dorset since eagles will range widely and not restrict themselves to particular counties!"

"I think most people in Dorset would agree that white-tailed eagles are a precious part of our wildlife and we should be cherishing them."

"Modern progressive farming supports the reintegration of wild predators back into the rural ecosystem in a managed and collaborative way. It's a pity that representing a rural constituency Mr Loder appears to be unaware of this."

At the time of writing, Mr Loder still hasn't deleted the staged photographs.